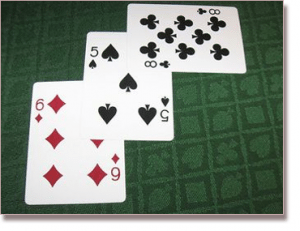 One of the best and most exciting options available in blackjack is when we have the opportunity to double down on a bet. As a ‘twice the risk, twice the reward’ option, it has the potential to net us a sizeable return, if we know how and when to properly employ such a tactic. As explained on our terminology page, to double is to place another wager on your hand, equal to the amount of your initial bet, in exchange for only one additional card, and the obligation to stand after that one card is dealt.

For example, if you have been dealt a Six and a Four (a total value of 10), you may choose to double your original wager of $100, as drawing a card valued from seven to 11 is a strong possibility and will stand you in good stead to win the hand. If you do win the hand, instead of receiving a $100 profit if you did not double, you will net a return of $200.

Double Down in Play

Doubling is an essential tactic, and if used correctly, helps to lower the casino’s house edge. A knowledgeable player should know when to employ this move for an advantage in the long run, but the decision needs to be carefully considered before commitment, based on a the following important factors:

Mastering basic blackjack strategies is key to winning. Here are some guidelines worthwhile remembering in order to maximise our chances and avoid unfavourable odds when opting to double:

The best hands to double down on are considered to be those with a value of nine, 10 or 11. We already have the ideal hand to hit on and end with a strong total with just one additional card. If you find yourself dealt a hand with these totals, consider doubling down to maximise your winning payout. There will always be a risk present in every decision you make, but the key to winning more games than losing is to take advantage of an edge while you have it. If you are hesitant to double down because of the size of the bet and your potential loss, you might be playing at a table with too high stakes.

Don’t Split Fives, Go For The High Five: A common tactic for players who find themselves with low pocket pair hands such as Deuces or Treys is to split them and improve their chances of winning with two separate hands, which is fine. But if you find yourself with a pair of Fives, refrain from splitting and consider doubling. A total of 10 points is a strong position to be in (as explained above), so with a pair of Fives and roughly a 24% chance of drawing a card valued at 10 points on the next hit (to give you a total of 20), doubling is in your best interests. You also have a solid chance of drawing an Eight, Nine or Ace, resulting in favourably high hands of 18, 19, or 21.

The ‘Rule of 9’ is an established guideline regarding when and when not to double if you are dealt a soft hand (a hand with an Ace). Knowing when to double with a soft hand is crucial, so it is worthwhile understanding the rule’s instructions which explain how to maximise our chances of winning. As always, these are recommendations and you don’t have to double just because these rules say so.

Be Mindful of the Dealer’s Up-Card

It may seem like common sense, but plenty of players often forget to keep the dealer’s up-card in mind before opting to double down. All of the above tactics should be dependent on the dealer’s up-card, and while it’s good to be aggressive, it can be unwise to double with a soft hand if your dealer has a Nine or Ten showing. The worst cards for the dealer are up-cards of a Deuce through to a Six because those cards give the dealer the highest chance of busting, and this is when we should pounce and double down. Dealer up-cards of Five and Six give their hand the highest chance of busting at roughly 42%.

Here are the most commonly recommended hands to double down on, taking in to consideration the dealer’s up-card:

If you are dealt an Ace with a Deuce through to a Seven, this leaves us in a relatively strong position to double (depending on the dealer’s up-card, as specified in the table). If your soft hand is an Ace and an Eight or Nine, then doubling is not favourable; standing is your best bet.

Being dealt an Ace and a Six or Seven is the ideal hand to double down on. Many people may opt to stand with a soft total of 17 or 18 which is fine, but doubling is often advised. As the table suggests, your decision needs to be dependent on the dealer’s up-card. If you do opt to double with a soft 17/18, you have a strong chance of receiving a card valued at 10 (giving you a hard total of 17 or 18) which leaves you in the position you began in, just with the chance to win double the cash. If you are dealt an Ace, Deuce or Trey, you now hold an even stronger total of either 18, 19, 20, or 19, 20 or 21. If you are dealt a Four on the soft-17 hand, that will also leave you with an unbeatable 21. The point is to take advantage of strong starting soft hands, because of the unique value the Ace holds.

American blackjack (unlike American Roulette) has more favourable odds for the player, so where possible, play American versions of the game.

American rules are as follows:
– You are not restricted when doubling down; you can have a hand with any value and choose to double.
– You can also surrender at any time, and the dealer must stand on a soft-17.

European blackjack has the following rules:
– When offered the chance to double, you may only do so if your hand totals nine, 10 or 11.
– The dealer must hit on soft-17, and you cannot surrender.